If I had to describe this cheesecake recipe in 4 words, I would call it mouth-watering, delicious, heavenly, and incredible. Pumpkin pie is a staple in most homes during the holiday season, and I thought it suitable to share this recipe to help put me in the holiday spirit a month early.

When we made this cheesecake for the first time we used store bought Philadelphia cream cheese and it came out great. Nevertheless, after a few years of improvisation and refinement, we started using fresh chevre goat cheese as the filling instead. It offers a richer, earthier flavor that you can't get from processed cream cheeses.

We have made this cheesecake for friends on several occasions now, and if you could see their faces when they take a bite you'd be running to the market to cook one up yourself.

Our favorite part of this recipe is the Maple Cider Rum Reduction. One taste of this concoction and you'll be singing "happy holidays!" Jon and I invented this while we were enjoying cocktails a few years back and decided to be experimental while looking for something warm and spicy to make a new drink out of.

We ended up with this delicious reduction that works with any holiday pie or cake, as well as in one of our favorite holiday cocktail recipes, soon to come. I strongly advise you to consider cooking this cheesecake for any holiday gathering. It doesn't disappoint, and it's the perfect dessert to compliment any Fall or holiday event. You could even make one for yourself, but sharing is the best part ;) 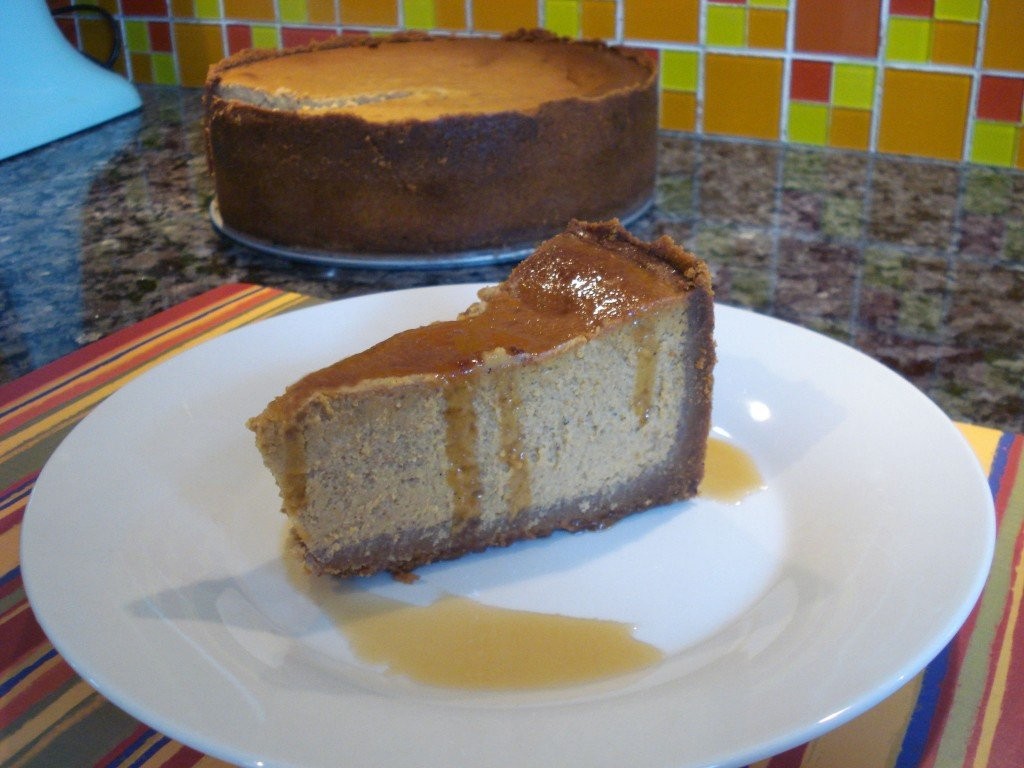 Preheat oven to 450F. In a food processor combine graham crackers, walnuts, brown sugar, and melted butter. Pulse until walnuts are ground, and mixture is combined.

Wrap a 9 inch spring-form pan with aluminium foil securely around entire pan so that nothing can leak in or out. You may need to use several sheets of foil.

Press the crumb mixture evenly onto the bottom and sides of the pan so that mixture is evenly distributed. Cover pan with foil and refrigerate.

Using an electric mixer, attach the beater attachment and mix cheese until it is light and fluffy. Add sugar and mix to combine. Add eggs, one at a time and beat until combined. Add pumpkin, cream, vanilla, cinnamon, allspice, nutmeg, ginger and cloves and beat for 30 more seconds on low. Remove crust from refrigerator, and add mixture on top of it.

Place pan containing the cheesecake to a larger pan. Fill up the larger pan with water so that water comes level with cheesecake. Using a water bath helps the cheesecake cook properly without splitting or cracking. Place in the oven and immediately drop temperature down to 350 and cook for 1 to 2 hours until center has settles, and the top is golden brown. Allow to cool for a few hours and refrigerate until ready to use.

While cheesecake is cooking prepare the sauce by adding maple syrup, apple cider, and cinnamon stick to a pan and bring to a boil. Simmer on low heat until mixture is reduced by half and watch it so that it doesn't boil over. Skim any scum from the surface while it is cooking.

When reduced by half, add butter, cream and rum and stir constantly until the butter has dissolved. Sauce is ready to use while hot, and you can refrigerate and reheat as needed.