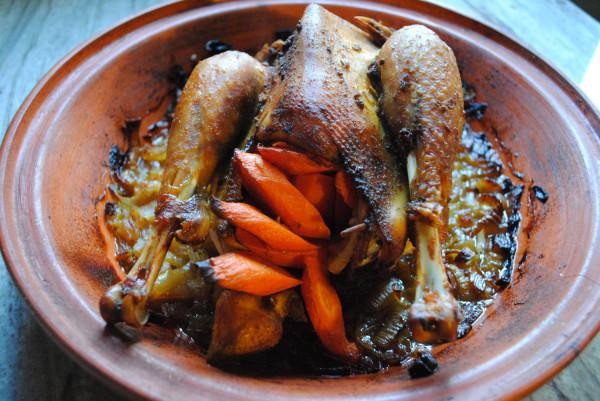 If there are two things in our kitchen that we never use it is our saffron and our tagine. We are always reluctant to use the saffron because there are so few food mediums that allow it to be showcased (and we can't afford to experiment with it often!).

The tagine rarely gets used because it is so often associated with strews, which we use the slow cooker for. Nevertheless, we love that our kitchen has both. Saffron has an elegance to it that lends sophistication to dishes, and the tagine grants a pleasant aesthetic presence on our kitchen counters while lending itself to diverse uses.

Tagines are distinctively Moroccan, and so they are mostly used to cook Morrocan food. Ultimately, however, they can be used for any recipe that calls for a clay pot or dutch oven. The idea behind all three is fundamentally the same. The use of clay pots in cooking is as ancient as cooking itself.

By cooking food slowly, at a low temperature, in a completely enclosed environment, everything inside the pot stay moist and tender. Unlike a dutch oven, the radiating heat circulating through the cone of the tagine helps roast the food inside. As well as making delicious thick stews, this cooking method can produce incredible meat dishes and even chewy, moist light breads.

We created this recipe with the intent of cooking an incredible, homegrown roast chicken. One of the many things we have learned in raising our own food is that chickens that are allowed to grow naturally turn out small and tough to eat. Younger birds are of course more tender, but they rarely get to a large enough size to feed a family of four. Still, since we do all of our own hatching, half of our birds turn out to be roosters, which is way more than we need to keep expanding our flock naturally.

Additionally, we have been selectively breeding our birds for size, laying ability, cold tolerance and temperament. Slow cooking our birds has been the ultimate solution. We were reluctant to try it at first out of fear that they could become dry, rubbery, or too soft. Instead, we have been pleased to find that this method of cooking has produced an incredibly moist bird with perfect skin and succulent meat.

The darker meat almost tastes like butter, melting in your mouth, and the skin is incredibly crisp. The meat pulls away from the bone so easily that we invariably end up getting more meat off our birds cooking them this way than through any other method. An additional goal with this recipe was creating a dish that could be cooked slowly, without much work, but that when done would include variety and sides, all prepared with one dish, without having to cook everything separately.

Onions proved to be a unique but perfect medium for the saffron. Their sweet, flat flavor allowed the saffron to feature prominently, and slow cooking them alongside the chicken lent their flavor and moisture to everything baking alongside them.

Even without the saffron, I would encourage their use in this dish. They replaced what would traditionally be a grain or starch with a healthier alternative and caramelized perfectly in the tagine; their juiciness allowed us to cook the bird for hours without having to add any additional moisture.

Finally, by cooking the carrots in the cavity of the bird they picked up a delicious chicken flavor and lent a soft sweetness to the bird itself. Thick cuts on these ensured they didn't turn mushy while still cooking through.