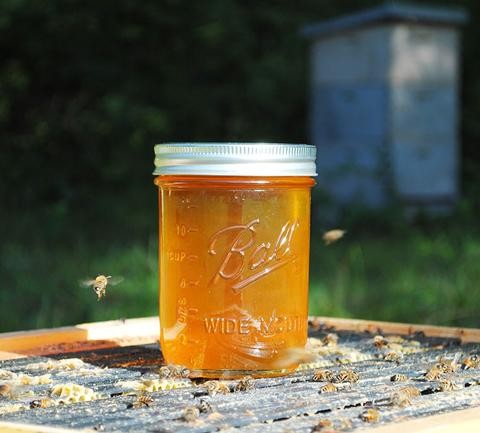 Honey serves many purposes, including as a sweetener, cough suppressant and even as a natural disinfectant. Health benefits include contributing to weight loss, wound healing and a safer alternative for people with heart disease. Whether used to sweeten tea, spread on top of fresh bread or eaten daily by the spoonful, it's one of natures most delicious and healthy condiments. A few of the top benefits of honey (including, most importantly, raw honey) are outlined below.

From high fructose corn syrup to aspartame, today's top sweeteners are linked to a variety of health issues. Although no sweetener should be used in excess, it's far better to consume a product that includes some nutritional value than one that provides only empty calories and are processed through chemicals. When consumed in moderation, honey is an excellent alternative to sugar and other common sweeteners, as it boasts antibacterial properties that standard sugar lacks which means it does not expire and has an indefinite shelf life if stored properly.

Honey's status as superior alternative to standard sugar also derives from its abundance of complex sugars. These are tougher to break down, which means the body expends more energy trying to process honey than it would for an equivalent amount of traditional sugar. This means that your body works harder to digest honey rather than allowing the body to easily absorb it and turn it to fat.

Although primarily composed of glucose and fructose, honey contains trace amounts of several essential vitamins and minerals, including zinc, manganese, phosphorus, and several B and K vitamins.

Long used as a disinfectant, honey naturally contains hydrogen peroxide, although levels vary significantly from one type of honey to the next. Typically, honey with a higher concentration of hydrogen peroxide will also have a higher degree of antibacterial properties.

A famous Mary Poppins song claims that a spoonful of sugar helps the medicine go down, but honey is a much better solution. A cup of tea with a spoonful of honey is the ultimate source of relief when you're dealing with coughing or a sore throat. Honey is listed as a demulcent with the World Health Organization, which means that it forms a protective film to reduce throat irritation.

Further empirical evidence is needed to back up what experts have long suspected, but prevailing theories indicate that honey acts as a natural vaccine, by exposing the body to tiny amounts of pollen when eaten. This triggers an immune response and produces antibodies. As the body becomes more and more accustomed to the presence of pollen, the release of histamines slows significantly, resulting in fewer symptoms over time. This is why many people consider local honey to be an essential part of their diets, because you would essentially be ingesting the very pollen that grows locally and causes your allergies.

Both raw and conventional store-bought honey offer a myriad of benefits, but these are amplified in raw honey, which contains small pollen grains otherwise filtered out for commercial purposes. This pollen prompts many of the health benefits outlined above, including resistance to allergies. Commercial honey producers also heat the honey to make it easier to bottle which kills and neutralizes everything inside the honey that the body benefits from.

Unfortunately, the downsides of commercial honey don't end with filtered nutrients. The origins of commercial honey are often frustratingly murky, with some even containing corn syrup and other additives. These reduce the amount of complex sugars in honey, thereby minimizing the energy expended as the body processes the sweetener. As a result, a greater share of the calories consumed in commercial honey are ultimately converted to fat.

Locally produced raw honey is cultivated with both taste and nutrition in mind. Some beekeepers carefully choose plants in hopes of promoting the sweetest, most fragrant and most nutritionally sound product possible. Their efforts are immediately evident with just one spoonful.

In moderation, honey can be a great dietary supplement, as well as a useful combatant against cold, flu and allergy symptoms. The right honey is critical, so when in doubt, choose raw honey over commercial alternatives.